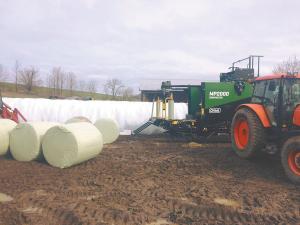 The Orkel stationary baler (Vol. 36, No. 4), now available in North America, could make corn silage as easy to package and move as big round bales. Viren D’souza, D’souza Farms Systems, is demonstrating the Norwegian-built baler to potential customers in Ontario and elsewhere. Meanwhile, he is doing custom baling with it. He thinks it could change how small producers view corn silage.

“Normally, you can’t move corn silage without feeding it within a day or so,” says D’souza. “This baler squeezes the air out, reduces the volume by at least 3 to 1, and wraps it airtight in plastic. Now you can transport it like any commodity and store it until needed.”
D’souza likes the simplicity of the machine. He notes that the company has wanted to break into the North American market, where corn silage is all about bunks and bags. With the Orkel, the silage (or other chopped material) can be dumped in by bucket loaders, compacted, wrapped and put in storage.

“Compaction is even from the first bale to the last, much better than packing a trench with a tractor,” says D’souza. “Being able to move corn silage and sell it to small producers without the equipment to make silage is huge.”
Of course the industrial strength baler isn’t limited to corn silage. While that season is only weeks long, other uses are year round. It works equally well with wood shavings, wood chips, sugar beet pulp, compost, and other waste materials. D’souza is experimenting with distillers dried grains and sees great potential for making and marketing total mixed rations.
“The real value of the Orkel is when you start baling things throughout the year,” he says. “It really shines with all types of organic matter. Squeeze the air out, wrap it and let it sit. Bulk material usually requires a walking floor or dump trailer, but bales can be shipped on flatbeds. They are less expensive and multi-purpose for return loads.”
D’souza describes baling wood shavings and letting them sit for more than a month. “When I opened the bale, they were cool and came apart easily with the hand,” he says. “There was no heating or other problems. Fermenting only lasts until the air runs out.”
D’souza also likes the Orkel for its ease of maintenance and operation. He points to automatically greased bushings instead of bearings in the compaction chamber and simple hydraulic-driven apron chains and other components.
“They are running all over the world with operators of all levels of skills and education,” says D’souza. “That says a lot about how robust they are.”
The Orkel baler is priced at $350,000 (Canadian) or about $275,000 U.S.
Contact: FARM SHOW Followup, D’souza Farms Systems, P.O. Box 160, Keene, Ont. Canada K0L 2G0 (ph 613 532-6455; virendsouza@gmail.com; www.baledstorage.com).